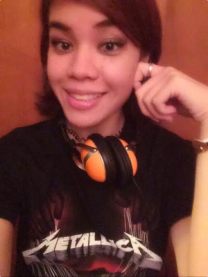 Hi, my name’s Elena and I am of Filipino and Italian-Sicilian ancestry.

I had identity issues growing up because of my mixed background and because of bullying and pressure from other children. I grew up in a majority Filipino town in O’ahu, so if you weren’t Filipino or Polynesian, you were an outcast. That’s how I’ve felt like most of my life.

Growing up, I would get bullied a little at school because although I was part Filipino, the other kids saw me as the “haole girl” (white girl) and it was apparently something to not be proud of.

I went through a stage where I would rely on being half Filipino to not feel left out and to feel accepted by the other Filipino girls. In junior high and the beginning of my high school years, I started lying about my ethnic background by telling everybody I was half Japanese and half Filipino and denying my Caucasian blood.

I actually pulled it off because I could speak Japanese so well and I guess I kind of looked it. Towards my junior and senior year of high school, I started telling everybody I was half Filipino and half Mexican; again, I was getting very good at Spanish and started hanging out with the only two Latino kids in high school and fooled everybody then too.

I had a lot of identity issues when I was younger, but after I graduated from high school I finally learned to accept who I am and embrace it. I’ve learned to not care about what others think about me or my racial background, though I still feel like nobody will fully accept me — white people will never see me as one of them and neither will Filipinos or Asians. It’s just something I’m going to have to live with, and frankly, I’m okay with it.