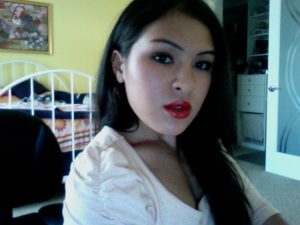 My dad is Japanese and German. His mom (my grandma) was born in Okinawa, Japan and relocated to Honolulu, Hawaii where she met his dad (my grandpa) who was already living in Hawaii as a full bred German. My dad grew up in Honolulu and was around many hapas and was once married to a hapa (his first wife). He always fit in because that was the normal thing there.

My mom is Chinese and Russian and was born in California. She identified with her white side more because when she was in high school that’s all there were. She moved to Honolulu, Hawaii in the 1980’s and met my dad through a mutual friend. They hit it off and lived together in an apartment near Waikiki for a few years before my dad moved to California.

When I was born my parents never made me identify with my Asian side or White side, they let me do my own thing. I grew up in a predominantly Mexican area so I actually never even identified with Asian or White. However, when I became a freshman in high school I began to become interested in Asian culture and started dating Asian guys.

Now I identify more with my Asian side but also love my White side. Even though people think I’m Mexican or Filipino I know what I am and I kindly tell them their wrong. I’m proud to be unique and hapa.