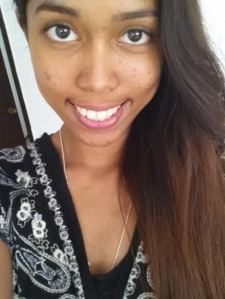 Hi! My name is Sassha. I was born and raised in the Philippines and moved to the states when I was 18.

My dad is of African American, Puerto Rican, white and Native American descent and my mom is Filipino. Growing up in the Philippines, I always struggled with my identity since I was made fun of because of my skin color. I was too dark as they would always say, so I didn’t blend in and I wasn’t considered Filipino. I was always called “the black girl.”

I have a younger sister who looks more Caucasian so whenever I would say that we’re sisters people wouldn’t believe me and would instead say that we’re cousins, which I took offense to. Being half white was more preferred over being half black.

Now that I’m in the states, I’ve noticed that Filipinos aren’t able to tell that I am Filipino, but non-Filipinos do and they make it a point to identify me. I always get asked what my ethnicity is or if I’m Filipino, which I don’t really mind as long as it doesn’t affect the way people treat me. I’ve been identified as Mexican, Filipino, and Indian.

I’ve learned to embrace and love who I am and what I am. All races are beautiful so I don’t mind being identified as one race or the other. I am very happy with my skin color and nobody can convince me to think otherwise. I am a proud Hapa!