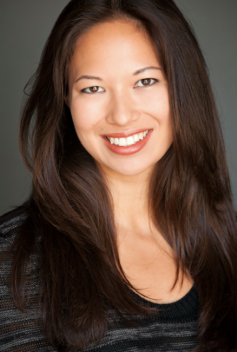 My parents met when my dad (Czech, Irish, Scottish, and French – born and raised in Ohio) served a Peace Corps mission in the Philippines where my mom lived with her family. He brought her back to the United States, where I was born.

When I was seven, my family moved to Salt Lake City, Utah, where most people were white and Mormon.

I remember getting teased a few times because my eyes were “like this” (as kids would pull the corners of their eyes up), but in general I got along with everyone.

Surprisingly there was a decent-sized Filipino community in Salt Lake City due to the many Mormon missionaries who served in the Philippines and found wives. Occasionally my family and I would hang out with other Filipinos, but I didn’t speak the language and felt disconnected from everyone there, especially the other kids who were full Filipino.

As time went on, I grew more connected to my Filipino roots, and made a name for myself in the community as Miss Filipina Utah. Now that I’m in my mid-twenties and have money of my own, I make a point to visit family in the Philippines every few years. I’ve now been there four times total, and each time I go, the culture and heritage feels more and more like an integral part of my identity. I’m not just an American Hapa; I’m an extension of the Philippines.

Now I live in San Francisco where I work in education development. My boyfriend is Persian, so I’m excited to see what our kids will look like!