My name is Chase. My mom is half Japanese and my dad is Caucasian (he was adopted) as far as I know. I identify as Japanese American.

As a kid I was close to my grandmother and became interested in learning Japanese and about Japanese culture because of her. She would always enthusiastically show me and my twin Japanese food, teach us a little Japanese, and tell us stories from when she was a girl in Japan.

I was amazed by Japanese culture, I felt like it was fragile and should be preserved in my family as there were barely any Japanese people where I live. She was the only one that spoke Japanese and knew about the culture so I talked to her a lot and tried to learn as much as I could about Japan. I remember bringing home books about Japan and showing her and the biggest smile would light up on her face and she would tell me a story she remembered. 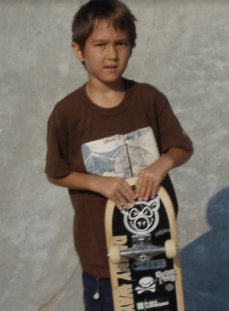 I remember walking to my grandma and grandpa’s trailer and always seeing umeboshi sitting on the counter along with a rice cooker that always had rice in it, soy sauce, packets of curry, and ramen. Every Saturday My mom, grandma, twin brother, and I would go to an Asian supermarket and refill her miso, natto, and on special occasions bought mochi. When she passed away a couple years ago it was really sad to see those things disappear. My grandma has played a huge role in my connection to my Japanese heritage and I couldn’t thank her enough.

Growing up in Indiana I wasn’t and still have not been bullied or picked on because of my race. I was mainly just asked what I was and where I came from. As I’ve gotten older I’ve become a lot more self conscious about my race and how people see me. Some people said that I can’t say I’m Asian because I’m only a quarter Japanese. At those times I just wished I was half like my mom or at least more than a quarter.

However, I’ve come to realize that I’m perfectly fine the way I am and don’t need anyone to tell me what I can and cannot identify as. It’s funny, the other day I watched “Are You Asian Enough?” from CollegeHumor, and I think a lot of people who are a quarter Asian can relate to that red-haired lady, including me.

Anyways, I’m really grateful to have grown up in a multiracial family, and even though I sometimes feel disappointed that more of the culture and language wasn’t passed down, I feel like a large enough window was opened for me to have a connection with it and the desire to learn about what I haven’t been exposed to yet.

Right now I’ve been studying Japanese for about four years and plan on studying abroad in Osaka once I graduate from high school this year. For college I’m thinking about majoring either in Japanese or International Relations, specifically between Japan and America.