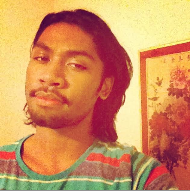 Hello all. My name is Chester and I was born in Mississippi to a Black American father and an Okinawan-Filipino mother.

My father was in the Air Force, which is how he met my mother. Before I was born they had two daughters who were born in the Netherlands.

People usually think I’m pure black until I grow my hair out, then they say I look Indian or Latino. I required very little parenting as a child and was always distant from both my parents. I guess that’s why I never really embraced either of my parents’ cultures.

I wasn’t too close to either of my parents due to the arguments they would often have with each other during my childhood. They became legally separated later on, but still hung out with each other out of financial necessity. My sisters and I were raised mostly by my mother, but my father was a constant presence.

I have many cousins on both sides of the family, but I’m not particularly close to any of them either. All of my grandparents died before I could ever meet them. My mother never taught me any Tagalog or Japanese, so that would result in awkward exchanges between distant family members who only spoke those languages.

As for my father’s side, they were all from the Deep South and there might as well have been a language barrier because I didn’t vibe with any of them either. I suppose it’s my fault because the family is there and willing, but I never compromise to get closer to any of them.

Distance has also been a major deterrent from building relations with my extended family. That’s just something to expect when half your family is from the other side of the planet.

One internal dilemma I had was when my mother would badmouth black people, even going so far as to say the N-word. She never called us children that, but still, I never knew how to respond when she said such hateful things. She must have felt we were different, but that’s not how the rest of the world would see it.

After all, I had almost no stereotypically Asian features. To everyone I encountered I was black, and that’s what I learned to live with. I never claimed my Asian side. My sisters would always make it a point to emphasize how they were half Asian, but for some reason I saw that as strangely desperate even though it was a fact.

I’ve had to suffer stereotypes my whole life and I can’t stand it. The main problem I have with that way of thinking is that I can’t be an individual. If I was good at playing basketball, people would say “His black side is coming out!” After my piano recitals, I would hear “Asian level!” I could never get credit for myself and my OWN hard work. It was always because I was Black or Asian.

I know that this problem isn’t unique to just those of multi-ethnicities, but it sure does cast a wider net over what you’re “destined to be capable of.” Also, there’s this: “If you’re half black and half Asian, what size is your d**k?” This odd, perverse question is brought to you by stereotypes. You’d be amazed how often I hear that.

There are many positives to being two races such as diverse families and good food, but a big negative is a sense of not belonging. There was a girl in junior high who denied going out with me because I “wasn’t black enough” to her. Just because I wasn’t a stereotypical black male. Then there was the time my ex-girlfriend’s mother, who is Korean, said she didn’t like me because I was too dark in photographs.

It wasn’t until we moved near another military base during my high school years that I met other “mutts” like myself who I could just forget about race with. Overall, I suppose I’m just American. That’s what I identify as. But curiously, that answer pisses most people off when they ask what I am.

One thought on “American”