Our Swedish dad and Filipina mom were introduced when their friends’ schools arranged a letter exchange to improve students’ English. We grew up in both countries, plus some other ones as well.

Michael married a Filipina and divides his time between Sweden and the Philippines; the sisters both settled in the UK, where for some inexplicable reason they always felt the most at home. We’re all addicted to travel. Our personalities are very different, but share an unusual background, and Mom’s Asian family values have kept us close-knit. 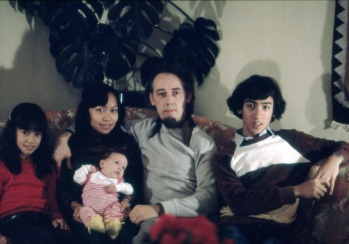 Michael: I’ve never actually given it much thought. I’ve always felt different – just different, neither better nor worse. And if you’re already feeling different, a little _more_ difference makes little difference. I do feel very comfortable in many different places and with many different cultures, without really blending in or feeling that I need to, but I don’t feel that that necessarily has anything to do with my mixed parentage.

Mia: Spending my childhood integrating into very different cultures was an amazing opportunity, because it helped me understand different cultures and individuals in a very personal way. Psychologically I find it easy to blend in anywhere, even picking up the local accent without realising it.

Appearance-wise, occasionally it can be fun to stand out. But I would never have chosen to be different – it’s painful for kids, and we’ve all been picked on. I’ve been stared at, accosted, prodded, even stalked and assaulted.

Strangers can be incredibly rude, either ignoring me when I’m talking to them, or calling me everything from “weird” to “mongrel” before I’ve even opened my mouth. Some people think they’re complementing me by saying “Eurasians are sexy”. Give me a break. As with any race some people are and some people aren’t, and the only person I want to be sexy to is my boyfriend.

Curiosity about ethnicity is friendly and totally understandable; drooling over someone because of their race is absurd and gross. All I would like is respect as a person, with a mind, heart and brains, same as everyone else. Identity, and humanity, goes so much deeper than appearance and accent.

Mia blogs about Zen on http://miahansson.com.