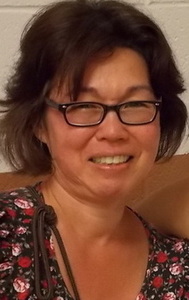 Hi everyone, my name is Barbara.

I am Irish and Danish through Dad, and pure Japanese through Mom. My parents met in Japan when my Dad was stationed there in the 50’s. My parents came to the US in the 60’s and my Mom became a part of that big American melting pot.

I was born in California but we moved on over to Hawaii when I was around 2, after Dad was transferred to Pearl Harbor. That’s where I grew up and lived the first half of my life. I was so lucky to end up there as Hawaii is Hapa paradise! Hawaii is the best place in the world to grow up.

Being raised in Hawaii gave me values from a young age. That is why my experience there was rarely negative. I never had people who made fun of or left me out because of my origins.

I was in my 20’s when I left the islands and moved to Europe. I’ve made a new life here and have been living in France for a long time.

In France I have noticed various degrees of curiosity towards me. So far, nothing harmful has happened to me but some people do seem resolved to figure me out. I’m often asked my nationality or asked outright if I’m Asian. I would always say first that I am American. Fortunately, I’ve also met friendly people who have learned from me and my culture as much as I’ve learned from theirs.

I remember once going to a designer shop in Paris to buy a gift. I was greeted by a French salesclerk who slewed out a long string of phrases in Japanese (even before I could open my mouth). I proceeded to say politely in English “No, I’m American.” Profuse apologies and then I was dropped like a hot potato. I could silently enjoy the humor of the situation as she pursued her perfect Japanese buyer. Yes, it was just another Hapa spreading some confusion ☺

More seriously, when you hear someone being put down because of their origins or culture, you feel the injustice. Hawaii seems to be light years away from such attitudes and narrow-mindedness. I wish that the rest of the world could be as cool and accepting.

I became even more proud of my roots after doing my family tree. My siblings, my niece, and I are the happy ties between people like Japanese farmers, Irish immigrant coal miners, and that 16-year-old boy who lied about his age to join the US Navy (Granddad). I do love the parts and the whole of my family tree.

Embrace who you are and share your gifts with the world. We each have so much to share.