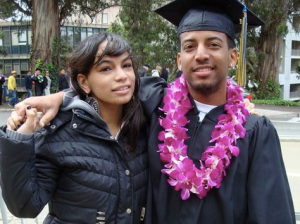 Hey! Our names are Geoffrey and Michaela. We are fraternal twins! We are African American, American Indian and South American.

We actually don’t know our birth parents because we were placed into foster care from birth and later adopted.

I was born and raised in San Francisco, California which is laden with a wealth of different cultures.

Growing up we were never looked at as fully African American. People often come up to us speaking Spanish and then quickly realize that we don’t speak it. Many people do not think that Michaela is black at all and is either full-blood Latino or American Indian.

Therefore we decided to get a DNA test not too long ago so we can actually tell people what our parents were and what we are as a result. The DNA tests concluded that we are primarily African American, 1/3 American Indian with a mixture of South American.

It feels great that we can actually tell people what we are made up of.There has been a hole filled because now we know where we come from. I encourage all foster kids and adopted kids to get the test done if you are not able to contact your birth parents. It will definite help you grow and feel more complete. We are going to connect with the Lumbee tribe of North Carolina and learn some Spanish now!