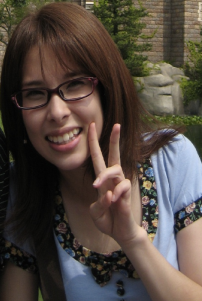 My name is Lisa I’m 18 and I live in New Zealand. I am half Kiwi (New Zealander) and half Japanese.

I think being Hapa is a real advantage. We can experience different cultures, have a taste for different foods, some of us can even be bilingual. Oh and theres the genetic need (for me at least) to do the peace sign in every single photo.

Anyway, I’m very lucky that my mother spoke to me in Japanese from a young age so I was able to pick some of the language up.  Last year I went to Japan with my family for 3 months, and I went to a school called Tokai Urayasu, in Chiba.

I love the cute as uniforms in Japan; they make you feel like a cartoon character. Lol.

I highly recommend overseas exchange, it is sooo much fun, plus because you look different, there’s the instant popularity.  The only bummer thing about the trip is that it ends and you have to go back to your normal life.  I was such a wreck on leaving day, I was crying (the ugly sobbing) for hours. I felt very split between my family and friends there and in NZ.

As many Chinese and Japanese Hapas will know, memorising the thousands of kanji characters is quite difficult!  Despite this I managed to finish high school level Japanese, two years in advance.  But two years ago when excellence awards were being given out, another Hapa and myself watched as everyone else in the Japanese class who had passed the year with excellence, received awards. We didn’t get any because we “have an unfair advantage.”

But here’s a happy ending to the story: The meany teacher has left, and last month we received excellence awards. :)

Hope this didn’t bore you! Thanks for reading!

One thought on “Kiwi, Japanese”