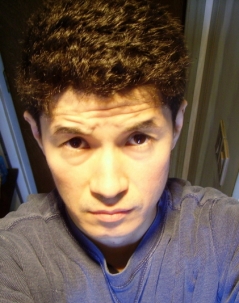 Hello everybody, my name is Michael Jurney.  I am half Korean and half white.  My mother is from South Korea and my father was from Tennessee, he was of mainly Scottish descent along with English and German. Most of my Scottish ancestors immigrated from Northern Ireland; usually they call themselves “Scotch-Irish.” I have some Swiss and Pennsylvania Dutch connection from my German heritage.

Growing up was very hard for me and also was very hard for my mother. My father had a great job but he quit to do gold mining. Everything went downhill after that. I was a hobo growing up after my father lost his job. My mother could barely speak English, and she never taught me Korean. My father was very stiff and ignorant person, and he never supported the family.

I learned to speak broken English when I was younger. I went to over 15 different schools from kindergarten to 12th grade. I was forced to go to special education due to my learning disability and speech impediment.

I remember when I used to live in Koreatown in Los Angeles back in the 80’s; I embraced my Korean roots more than my Western roots. My mother had a Korean friend, she treated me like a nephew, I used to call her “ee-mo” (Korean for “aunt”). We visited Korean restaurants and stores many times together. My mother and I celebrated Seollal (Korean New Year) and Chuseok (Korean Harvest Festival) with her friends and neighbors. Most of my friends were Korean, but sometimes I felt rejected because I don’t look Korean.

By the time when I was 12, my father decided that the whole family was going to move to a small town in Northern California, where there were no Asians at all. I remember my first day at school, everybody was full Caucasian expect for me. One student came up to me and asked me if I was Mexican, and I replied “no I’m half Korean and half white.” She replied back to me “oh Chinese!” and after that everybody at school treated me so mean and called me “gook” and “chink” and told me “go back to China!”

That’s when I started to face racism. My speech impediment got worst, and other students and teachers assumed that I didn’t speak fluent English. My Korean pride started to fade away and I started to be more Westernized. As the years passed by, I denied my Korean descent to avoid getting bullied. I used to lie to other people saying I’m half white and half Native American just to fit in with others.

Through my teens and 20’s I went through an identity crisis. I look hybrid. There are people who see me as a Caucasian person and others who see me as an Asian person. People who saw me as an Asian person treated me like a foreigner; it kind of reminded me of how people used to treat me when I was younger. I felt depressed, and had social anxiety. It was so bad I couldn’t visit any public places. At the time, I had no self-esteem. I tried to overcome my depression and social anxiety and learn to accept myself for who I am.

I didn’t know the word “Hapa” until I was in my late 20’s when I typed in “half Korean half white” in a search engine, that’s when I found out about the book Part Asian, 100% Hapa. Reading it brought tears to my eyes. Now I  embrace both of my roots.

My father passed away when I was almost 30, we learned the hard way when my father’s family completely disowned us when we needed their help. That’s when my mother’s family helped us and that’s when I met my Korean aunt for the first time. We celebrated my 30th birthday, it was a wonderful gift.

I’ve learned a lot from my mother how family is very important. I do have family living in South Korea, so maybe one day I can learn to speak Korean so I can communicate with my mother’s family and also learn the Korean culture.

I am both a Korean guy and a white guy. Hapa pride!!